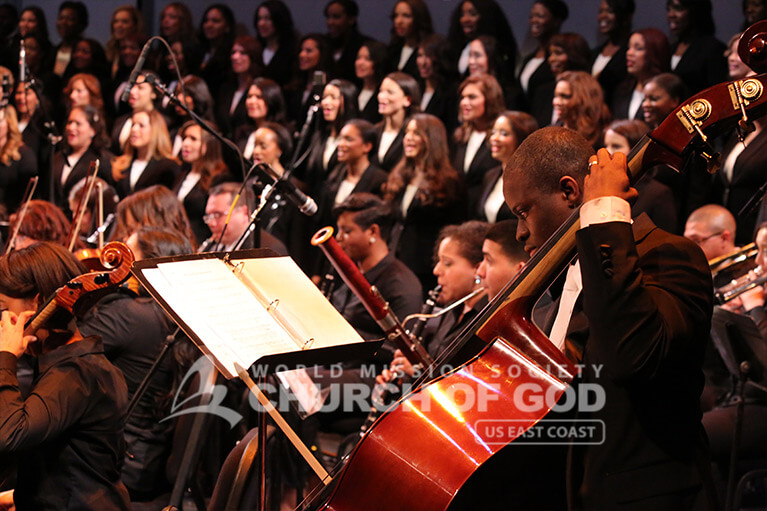 As the lights dimmed, signaling the start of the evening’s performances, the sound of hushes filled the corners of the New Jersey Performing Arts Center. The audience eagerly awaited the World Mission Society Church of God’s 50th Anniversary celebration, Mother’s Love the Key to Global Harmony, to begin.

The spotlight fell on the two hosts, who came on stage to greet the audience with warm words of welcome. They thanked friends, family and neighbors for joining them in commemorating this special event as they introduced Pastor Daniel Lee of the Church of God.

The curtains then parted, revealing a podium decorated with a bouquet of vibrant flowers. Standing behind it, Pastor Daniel Lee again thanked the audience for joining the Church of God. He explained that this was no ordinary celebration, but a jubilee celebration. Biblically, God grants special favor to His people every 50 years. It has been 50 years since its establishment. And all those in attendance felt the favor God is granting the Church of God.

As March is International Women’s History Month, Pastor Daniel Lee acknowledged the great contributions women have made globally. It is no coincidence to the Church of God that the rights of women have grown exponentially over the past 50 years. Members attribute this growth to none other than God the Mother.

Harmony in the Family and Among Nations

One of the day’s speakers, Mr. August Kruesi, explained, “Sometimes cells in our body lose their memory of who they are. They change, and develop an altered metabolism. They stop doing their function, and they block healthy cells that are still trying to perform their functions. What do we call this? This is the basic definition of cancer.” Cancer is the end point of a lack of harmony within our bodies.

In the same way, he explained, war is the endpoint of a lack of harmony between nations. “What happens when nations only want to feed themselves; when nations don’t feel the need to be part of one global body? What does it mean when there is no precedent of giving in to maintain harmony? War is a hideous display of disharmony in our world.” How can we prevent this from happening?

Mr. Kruesi went further to explain a recent experiment conducted with water. The experiment proved the importance of using words of love.

“We’ve discovered that water can convey information. Water molecules are not random but cluster in many dozens of unique patterns. If we speak beautiful words to a vessel of ordinary water, and then spray it into a cold chamber, it will form beautiful snowflakes. If we speak hateful words to that same water, it will form ugly and misshapen ice crystals. The words we speak can create harmony, or trigger war. Through this experiment we can see how powerful loving words and hateful words can be. Through the visible results of this experiment, God teaches us something important about love.”

He added, “To learn harmony, we need a model to follow, a perfect example that we can look up to. In the Church of God, our model is Mother’s love… Mother teaches us that words and deeds of love can spread from one to another. And, step by step, restore harmony to a world infected with disharmony. Mother teaches us that this is the path that allows us to return to the Kingdom of Heaven.”

Psychologists have explained that pregnant and postnatal women experience an increase of dopamine and oxytocin. This creates an unbreakable bond and harmony between a mother and her child.

These neurotransmitters and hormones allow a woman to undergo extreme pain and trauma for the sake of her offspring. A mother’s DNA contains this incredible ability to sacrifice for another. Because of this, mothers play a crucial role in the survival of mankind.

The Love of God the Mother

As the Church of God is united through the love of God the Mother, Mother continuously passes down Her nature. She teaches the members to treat people well and give in for one another. As a result of Her example, now more than 2.2 million members are bringing hope, passion and harmony to the world.

Those who never heard of God the Mother were genuinely intrigued by the way that She is leading so many people of different cultures and backgrounds to carry out good deeds in every continent. The notion of God the Mother made so much sense to them, and medicine and science made it easy to understand. But what was most profound was the feeling of Mother.

The performances and speakers reminded all guests of moments with their own mothers, grandmothers, or wives. Many people were brought to tears. Many realized that through God’s creation, it is impossible to deny the existence of God the Mother and how harmony between individuals is taught through a mother.

Now that the audience’s minds had been stimulated and their eyes had been open to understand God the Mother more, the hosts returned to introduce another display of harmony. This time through dance.

Six performers, dressed head to toe in black leotards with silver accents, glided onto the stage and took their positions around each other. The sound of a violin pumped from the acoustics. The dancers captured the audience with their graceful movements and grand leap toward heaven.

Following the contemporary dance “Seeking Harmony,” was a Latin dance entitled “Fiery Stones.” Eight billowy red skirts waved about the stage to the beat of drums. Although not everyone could understand the Spanish language that was sung, everyone felt the jolt of excitement with the music’s upbeat tempo and the dancers’ high-energy motions in a display of the Church’s diversity. Applause ran through the theater as the dancers exited.

The Final Dance Performance from a Royal Korean Court

The final dance performance came directly from a royal Korean court. Called “hwagwanmu” in Korea, “Royal Devotion” featured 11 dancers in brightly colored hanboks, floor length traditional Korean dresses. The dancers moved delicately, seemingly floating about the stage. Together, they extended their hansams, long sleeves, to the beat of the traditional Korean music. The combination of colors and elegant movements hypnotized guests and transported them to a far away land. Upon bowing ever so slightly, the audience showed their appreciation for the experience with applause.

Taking the stage once again, the hosts then introduced a vocal performance in remembrance of all the people affected by Hurricane Sandy.

To soothe the memories of Sandy in the hearts of the audience, the singer performed Leona Lewis’ “Run.” As she stood center stage, footage from the Church’s Hurricane Sandy disaster relief efforts played on the background screen. Her rich voice penetrated the hearts of the audience as they witnessed the impact that Heavenly Mother’s love has had not only on Church of God members, but on the community at large.

Her rendition, in combination with the moving images, brought tears to the eyes of the people. Loud applause concluded the first half of the event. Attendees felt Mother’s love pierce the walls they had raised around their heart. Those blocks crumbled as tears ran down their faces.

After intermission, the hosts welcomed everyone back in their seats and joyfully readied them for the second half of Mother’s Love the Key to Global Harmony.

The parted curtain, revealing a breathtaking sight: 120 members of the New Jerusalem Choir & Orchestra standing still on the stage as the hosts introduced classical solo pieces. A world-class violinist and member of the Church of God performed Brahm’s Concerto in D Major violin solo followed by Chopin’s Etude, Op. 10 No. 4 in C# piano solo played by a Julliard School alumna.

The hosts prepared the audience for the next musical performance, Handel’s “Let the Bright Seraphim,” describing it as the dramatic ending to the composer’s oratorio Samson. The song celebrates God’s victory with a fluttering duet of vocal and trumpet notes, playing upon each other’s melody.

The piece that followed was a favorite of the night – the men’s quartet, a four-part harmony to the classic “Amazing Grace” by John Newton. Supported by the New Jerusalem Orchestra, the group expressed the magnitude of God’s grace through the touching lyrics and melodic voices. A powerful duet singing “The Holy City” followed the quartet. They left the audience in complete awe.

The New Jerusalem Choir and Orchestra then performed a breathtaking New Song set, “Since Christ My Soul,” “Heavenly Throne, High Above,” and “Our Mother Saves the World.” Whether through the cello, violin or French horn, each member of the orchestra poured out the love they have received from God the Mother into the listening ears and hearts of the audience.

Guests felt the magnitude of this love as the voices radiated from the stage the inexplicable emotion that tugged the strings of their hearts. Eyes glistened as their spirits awoke to the majestic sound of New Songs. The audience rose to their feet in a standing ovation as a way to show their heartfelt appreciation. The message of harmony clearly impacted guests.

This impact caused a radical shift in the perspective and minds of those who attended. One member’s family, who was previously closed to knowing about God the Mother and the Church of God, completely changed after the event. The family united together in their love for New Songs and the message of unity and global harmony. The member’s family is now proud that their children are a part of the Church of God.

After the event, another member’s mother gave thanks and praise to God the Mother, wishing that Mother bestows blessings on all the members and families of the Church of God. She was grateful for the experience and the love she was shown through the members, speakers and performers.

Before the closing remarks, Fátimazöhra Nouínou of the United Nations, delivered a speech about the necessity of empowering women and girls to advance society. She delivered her personal slogan, “Educate a girl, educate a nation,” to help the audience understand how important and essential women are in the world and the depth of their impact in human history.

To close the event, the hosts thanked all the performers, speakers and, most importantly, the guests for spending the evening with the Church of God for this special event. Everything that happened during those three hours was a demonstration of the Church’s beliefs in a beautiful array of costumes and instruments. The favor God showed that day showed on the smiling faces of the guests as they realized God the Mother and Her power.

As women are gaining more and more recognition around the world for their talents and success in bringing harmony, it allows the people of the world to recognize the immense power and love that comes from knowing and believing in God the Mother. Maternal instinct in the world is a testimony to God the Mother. 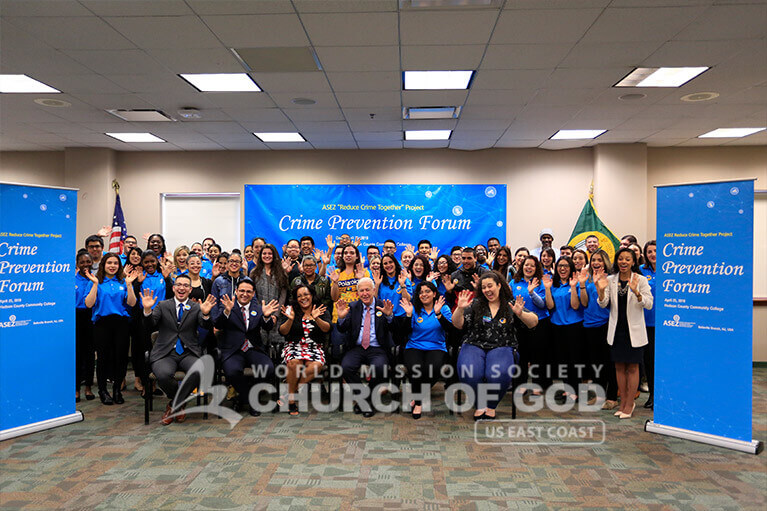 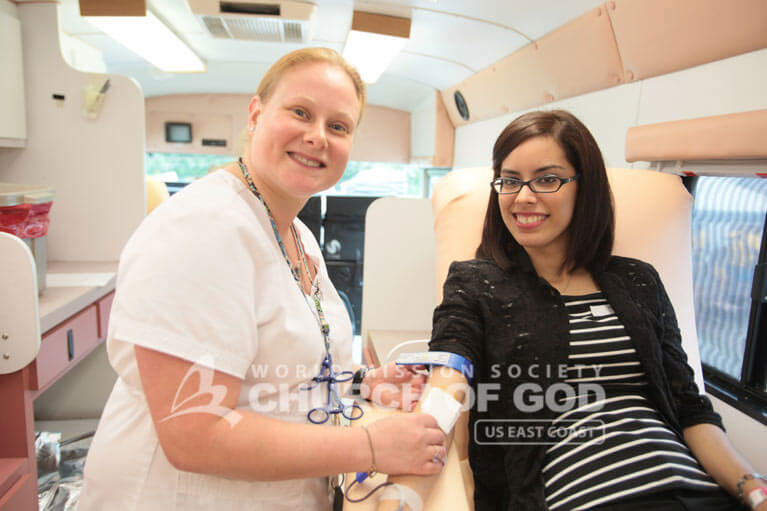 Unity in the Community Blood Drive

The Church of God held the Unity in the Community Blood Drive to spread awareness of the importance of donating blood.